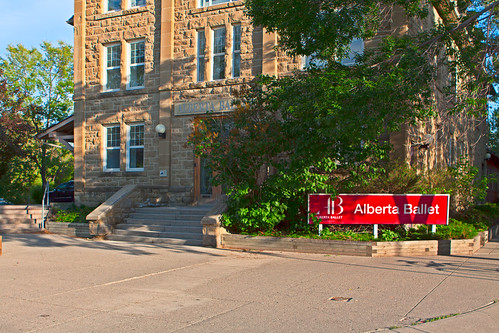 On Thursday, June 25, 2015 I took a photograph of the Nat Christie Centre, current home of the Alberta Ballet.

I have wanted to take a photograph of this historic building for some time. One of the challenges, however, is that it faces north, which at Calgary’s latitude of 51 degrees means that the sun rarely kisses the front of the building. June 25 is very near the summer equinox, when the sun is at its furthest northern point. I was able to capture this photograph during the late evening at very nearly 8 p.m. when the sun was low on the horizon, at about 15 degrees. I like how the sun casts warm shadows across the building.

I recently attended an Alberta ballet lighting presentation in the Nat Christie Centre. One interesting thing that struck me was that the dance studios are warmer than typical room temperatures. The reason for heated studios is to keep the dancers’ muscles warm, thereby reducing injuries.

The Nat Christie Center itself has an interesting history. Constructed in 1905, the building initially served as a parish hall for St. Mary’s Roman Catholic Church, including a 500-seat theater used for various purposes by the community. Later, in 1911, the Canadian Northern Railway bought the building and surrounding property. The facility continued to serve as a train station until 1971. Then, in 1979 the city of Calgary purchased the train station, and it was designated a provincial historical building. Five years later, with funding from the Nat Christie Foundation, Alberta Ballet became its latest and current resident. You can perhaps read a more complete description at the Collections Canada Alberta Arts Heritage website.

When this article was originally created, I was able to link to a specific page at Collections Canada Alberta Heritage. That page has been removed and I have not found a replacement.

Erin provided two helpful links in her comment to this article.