I normally provide an oil price forecast with a ten-dollar range indicating where I expect West Texas Intermediate prices to be in the upcoming month. For this month’s oil update, I am suspending my forecast. 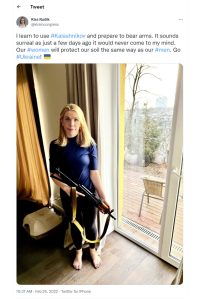 A tweet of Kira Rudik, Ukrainian MP, holding a Kalashnikov rifle in self-defense.

The US Iran negotiations, known as the Joint Comprehensive Plan of Action (JCPOA) are reaching a critical point where a decision may be taken soon. I am not sure, though, if the current conflict in Ukraine has any bearing on these negotiations.

The Russia, Ukraine, NATO, and US conflict in Ukraine is horrific. I am unable to judge how this conflict will manifest itself in terms oil prices over the next month. There are simply too many moving parts. All I can say is that I expect oil prices to remain elevated—which is obvious to most everyone.

Because that I am Canadian with a Ukrainian last name, it should be easy to guess where I stand on the conflict. I want Ukraine to be a free and democratic country.

One of the challenges of writing about current events is that I expose my lack of historic and current knowledge. While I have read some history concerning Russia and Ukraine, I am far from an expert. I tend to follow current developments quite closely by reading several online sources and using Twitter. The reports and images are heart wrenching. When reading others’ thoughts and opinions, I check to see if I support their general views and logic. Two of Thomas L. Friedman’s latest op-eds in the New York Times resonated with me: “This Is Putin’s War. But America and NATO Aren’t Innocent Bystanders.” and “We Have Never Been Here Before.” Both op-eds require a subscription, though I believe that if you register with your email, you can read a limited numbers of articles without a subscription.

In the first op-ed, Friedman says that America and NATO all share some portion of the blame. And in the second, this conflict will be covered in social media and will affect the way we see war.

Some in the West might be inclined to demonize Russian people. That is a mistake. Like the citizens of any country, the population is not homogeneous. The Russians that I correspond with are kind, gracious, and wonderful people. They abhor war just as much as I do. So when I see war causalities—from either side—I mourn for the families that have their lost loved ones.

Seeing Ukrainians having to take up arms to defend themselves and their country breaks my heart. I have included a tweet from Kira Rudik, a member of parliament in Ukraine, which shows a picture of her holding a Kalashnikov rifle to defend herself and her country. Middle-aged people having to take up arms in self-defense in 2022 is abhorrent. Yet here we are.

No one knows how or when this conflict will get resolved. Because this is only the fifth day of the conflict, there are likely to be a few changes in shifts of momentum.

Like so many, I am upset and disappointed by these developments. I hope that because the world has become unified against this war, it gets resolved quickly.

Once there is more semblance of normalcy, I will go back to providing my forecasts.